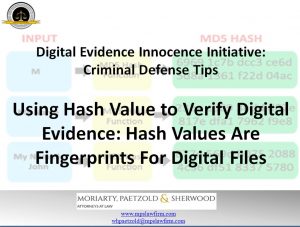 Hash values are a useful tool for assisting Public Defenders in the authentication of digital evidence for criminal defense cases. Hash values are also useful for verifying the integrity of data sent through insecure channels.  A hash value is an alpha-numeric value of a fixed length that uniquely identifies data.  Think of a hash value as an evidence seal for your digital evidence.  Just like if the evidence seal is broken, if the original file is changed or modified it will no longer have the same hash value, and it will show that the file has been altered and the digital evidence is no longer authentic.